A former co-worked once called me a Luddite. I think he was joking but...

My recent efforts at trading cars reminded me of that accusation. {This will turn into a tech story shortly.)

We have had a 2013 Nissan Pathfinder for over 3 1/2 years. While we always enjoyed the ride and comfort of the Pathfinder it was fraught with recurring problems.

Normal wear and tear and indicated us to replace the tires at just over 60,000 miles. Simultaneously the sun visors began drooping (like every 2013 Pathfinder does after the warranty lapses), the tailgate resumed its former issue of not power raising or lowering, the driver's window started to go up way more slowly than the passenger's and the brakes started screeching.

My wife refused to put any more money in it so we were off to look for a replacement.

We surfed around and came up with a short list: Honda Pilot and Toyota Highlander. We have had lots of both brands but most recently I've been driving Hondas so off we went to AutoNation Honda 385.

Our first drive was a 2017 Pilot Touring. We stopped at a red light and when I released the brakes the engine gave a noticeable shudder. I asked the saleperson in the back seat what that was. He said it was the "Idle-Stop" feature.


The idle-stop feature-standard on Pilot Touring and Elite trims helps maximize fuel efficiency in stop-and-go traffic. When the vehicle is at a stop for at least 2 seconds-such as at a traffic light-the engine automatically shuts off to save fuel. When you release the brake pedal even slightly, the engine starts back up by itself.

When I asked the salesperson if that feature could be disabled he showed me a button on the console to disable it. But it gets reset every time you turn the vehicle off and back on.

We drove a little more and entered an Interstate. I accelerated and felt the transmission shift several times with one being a bang-bang. Again another question to the salesperson. His response was that the Pilot Touring has a ZF 9-speed transmission. While that explained the several shifts it didn't explain the bang-bang. The salesperson had no further explanation.

I inquired as to whether all Pilots had these 2 features and the salesperson said that the models below the Pilot Touring, e.g. Pilot EX-L. didn't have either.

Frustrated we headed across the way to Principle Toyota to look at Highlanders. Guess what ALL (except the entry level model LE) of the 2017 Toyota Highlanders have? Yep, "Stop-Start". And no way to turn it off.

That's where the Luddite in me started to come out.

There's lots of discussion on the Internet about why the manufacturers are so aggressive with this idle-stop feature. The EPA mileage difference between the Honda Pilot EX-L (19/27/22) and the Touring (20/27/23) are minimal and much more likely to be related to the 9-speed transmission.

We didn't drive the Honda Pilot hybrid models. I'd hope that these models would drive off under electric power and start the conventional engine while underway. This would at least mask the shudder of the engine restarting.

Now for the 9-speed transmission.

This YouTube video does a much better job of explaining it than I can.

tl:dr There are 2 shift points that use dog clutches instead of the traditional plate clutches. These shift points are what I felt as a bang-bang. 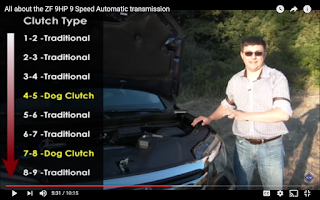 Again there is no circumvention for this feature.

And the Internet is on fire with complaints about the ZF transmission. Motor Trend's long term test unit even had to have the transmission replaced.

So what did I do?

I gave Honda less money than I would have otherwise and bought a 2017 Honda Pilot EX-L.