How does Google Maps know about traffic? Here's what Business Insider reported.


Here's how it works: All iPhones that have Google Maps open and Android phones that have location services turned on send anonymous bits of data back to Google. This allows the company to analyze the total number of cars, and how fast they're going, on a road at any given time.

Even Google has blogged about it.


If you use Google Maps for mobile with GPS enabled on your phone, that's exactly what you can do. When you choose to enable Google Maps with My Location, your phone sends anonymous bits of data back to Google describing how fast you're moving. When we combine your speed with the speed of other phones on the road, across thousands of phones moving around a city at any given time, we can get a pretty good picture of live traffic conditions.

But here's the creepy thing. At a lunch over the holidays, an executive in a Memphis-based logistics company told me how a Google executive had told him how Google gets location feeds from the cell carriers.


So how does Google know what traffic is like on the roads, nearly all the time? From our smartphones, of course. Whether you like it or not, “telephone companies have always known where your phone is,” Dobson says, because cell phone companies need to use location to appropriately charge customers for calls. That means the companies are constantly monitoring location based on the strength of signal to a cell tower, which allows the phone to switch towers as it travels.


Google also crowdsources location data from telecom companies. These telcos monitor user location data by a method called Trilateration, in which the distance of a user measured between two or three surrounding telecom towers is used to analyse the speed and location of the user. 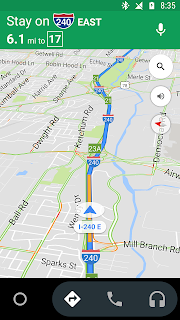 It takes a little reading between the lines to discern that the cell carriers are selling location data to Google but my source is impeccable.
Posted by Ben Moore at 7:45:00 PM