I've been using CyanogenMod for years on a variety of phones. I've always had good luck with it. When Google announced that the Nexus 5 wasn't going to be updated to Nougat I decided to do it on my own.

I did my research and decided to do the upgrade between Christmas and New Years.

Then I saw this on 12/24/16: Cyanogen is shutting down all services and nightly builds on December 31st

But then I saw this on 12/28/16: CyanogenMod Is Dead, and Its Successor is Lineage OS

I had time over the holidays so I went ahead and flashed the final nightly of CyanogenMod Nougat. It worked fine.

As I had done previously I had to unlock the bootloader, flash TWRP using Fastboot, flash the CyanogenMod ROM and then the nano OpenGApps. I'm getting pretty comfortable with this.

By mid-January LineageOS had a nightly for the Nexus 5.

To migrate from CyanogenMod to LineageOS (LOS) I had to flash an "experimental" version of LOS and then the signed LOS ROM.

Just as with CyanogenMod this all went well.

They have even gotten SafetyNet to run cleanly. 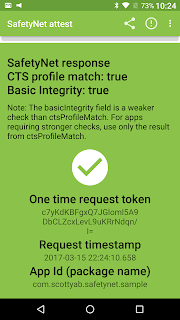 The Over The Air (OTA) updates to LineageOS have started working and I've OTA updated each week.

Battery life seems generally unchanged from the OEM Marshmallow. I swapped from the PRIV to the Nexus 5 for a week or so but went back when I felt like the camera was much poorer than the PRIV.
Posted by Ben Moore at 7:33:00 PM