On March 12, 2019, Google suffered an outage that impacted Gmail and a variety of their services that depended on their file system. Over the next several hours they posted 3 updates on their G Suite Status Dashboard. The first noted that they were having an outage. The second update was posted in under 2 hours and stated that they were continuing to investigate. It also enumerated the services that were impacted. The final update was 2 and 1/2 hours later and said that the issue was resolved.

But Google didn't stop there. 2 days later they posted a thorough postmortem (archive.is) that identified a root cause and remediation and prevention.

That's the way to communicate.

Here's Facebook's communication on that outage. 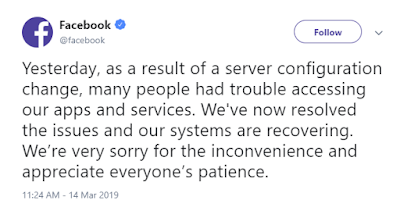 Which of these would you prefer from your services provider? Ask about that before you sign a contract and consider putting a requirement for communication and follow-up in the contract.