I'm not big into surveillance cameras but a while back I thought I had deer playing in my back yard. I wanted to capture them jumping the fence.

I came across the Wyze Cam. It is a cube about 2" on each side. It takes 1080p video and automatically records a 10-15 second video when it detects motion or sound. These are encrypted and uploaded to Amazon AWS where they are available for 14 days with no subscription plan required. These snippets are also stored on the microSD card if available and the last 32GB are retained. That's a lot of 15 second videos. 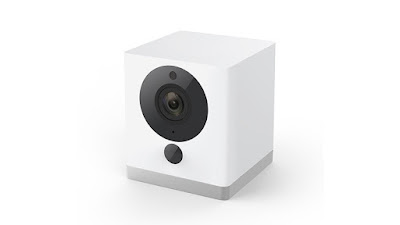 .
While the Wyze Cam is intended for indoor usage, it is pretty tolerable of outdoors. I have mine on a screened in porch.

Watch the cat walk around!


Notice how it highlights motion.

It has infrared LEDs so you get black and white video at night. Initially I placed mine on the porch table near the screen. The infrared LEDs produced a glare from the screen so I taped over them. I still got good video with the ambient lighting. I could have just turned them off with the app.

It connects to your Wi-Fi and there are apps for Android and iOS. It will connect to Amazon's Echo if you have one with a screen.

You can set it to send you an e-mail when it detects an event, motion and/or sound. I haven't used that.

It comes with a variety of mounting bases but I have mine just sitting on a table.

Its power is USB and it comes with an AC adapter. I've thought about putting it away from the house and running it off of a battery pack.

The Wyze Cam costs $39 with shipping and a 32GB microSD it needs card to allow local recording. If you have a spare microSD card laying around you can get the camera and shipping only for $26.

There's even an open source project to let you connect the Wyze Cam to an existing security system. And of course there's a subreddit.

Here's some screenshots from the Android app. 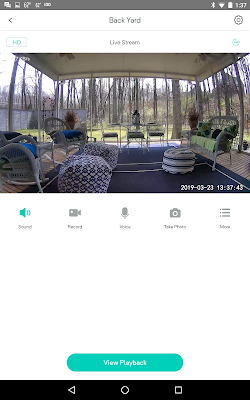 The intruder in my back yard wasn't a deer but a raccoon.