I liked the size of the 2012 but it was soooo slow, even after I upgraded it to Nougat. It stays in my car now.

The 2013 was fast enough but the battery has just played out. It will indicate 100% battery available and then just cut off.

Then I came across an Amazon Fire HD 8 (2017) without special offers for $50. I didn't know much about Fire tablets but for $50 it was worth playing with. 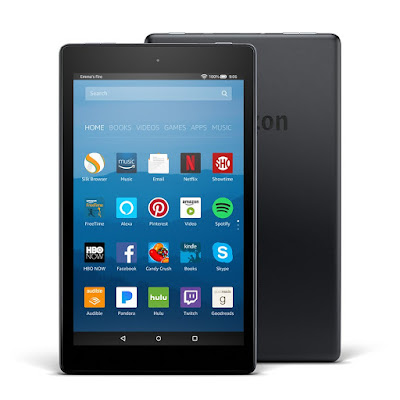 The Amazon Fire HD 8 (2017) is a favorite with hackers. There are instructions on how to install the Google Play Store on it. That was easy.

But then Google Contacts didn't work. There's a fix for that.

And the Amazon launcher was odd. There's a fix for that.

The launcher "fix" is still flaky. Amazon blacklisted the apk and it quit working. The creator rebuilt it with a different name. That's working for now.

I suspected the launcher "fix" app. So after a hard reboot I uninstalled it and rebooted. That took me back to the Amazon launcher and the navigation buttons and notification bar were back.

Then the rest of the OS update kicked in. Afterwards I reinstalled the launcher "fix" and it worked this time.

That's pretty much the story of the Amazon Fire HD. It always seems to need something fixed.

That would be tolerable if it was blazingly fast but it's not.

It only has 1.5 GB of RAM so apps are constantly restarting. The launcher "fix" works by letting the Amazon launcher run then running the alternate launcher so you get a noticeable flash every time you press the Home button.