Reload Windows on Your New PCs

Now, Dell is not my favorite PC vendor. It probably has something to do with the smoke that came out of my coworker's office as her new Dell laptop burned up.
But I'm not going to jump on Dell in this post. You can do whatever you want.
This post is about what you should do as soon as you buy a new PC.
But first, I will mention what cranked me up on this.
Since 2009, Dell has been distributing "nice" utilities on all of its PCs that updated their firmware. These packages were variously called Dell Command Update, Dell Update, Alienware Update, Dell System Inventory Agent, or Dell Platform Tags.
The problem is that these packages installed Dell's DBUtil. 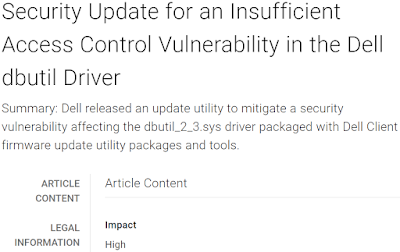 In December 2020, SentinelOne notified Dell of five vulnerabilities in this utility.
DARKReading described it:

The bugs give adversaries a way to bypass security products, wipe a hard drive, or install a malicious driver on a domain controller. "The attacker is effectively the system administrator."

What I don't want to do is suggest that this is exclusive to Dell. Lenovo has had similar issues on its products.
So, what should you do?
Format and reload Windows on ANY PC you get before you do ANYTHING with it. Get the bits from Microsoft here. Don't worry. Windows Update will install all the drivers that you need. You'll save significant disk space and won't have any bloat-ware the vendor installed.
You can thank me later.
Posted by Ben Moore at 7:49:00 PM