I know that's an odd title but you'll see its importance in a minute. Remember last year when I whined about Word 2007 not supporting some early Word file formats?

Well, I got to share the misery with everyone who put Service Pack 3 on Word 2003. Microsoft imposed the same restrictions on those users.

I've just about learned to screen capture pages from Microsoft. KB928850 now explains how to unblock the older file formats in all the Office 2007 programs. KB922849 has the details for Word 2007. 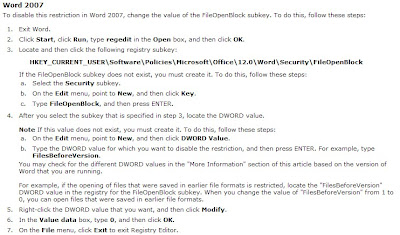