One thing I immediately noticed on the Captivate was that there was no way to take a screen capture. I searched and all I found were several that required either rooting or USB cable connection to a PC.

Then on androidforums.com I found a post that referred to Screen Capture Shortcut.

There's a free version and a "donate" version. On the free version, when you launch it you'll find "capture from notification." Check that. Just below is "capture delay." I set that to 1 second. Then exit the app. 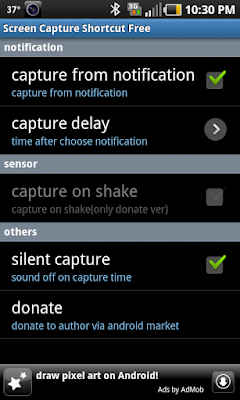 When you want to capture a screen drag the notification bar down and click on the "Screen Capture Shortcut" notification. After the delay period (1 second in my case) the screen will be captured and written to a folder in internal storage named "ScreenCapture." It appears that the donate version has an option to "capture on shake."
Posted by Ben Moore at 7:59:00 PM