After I got my BlackBerry PRIV I started noticing that some phone calls sounded crystal clear. It took a while to recognize that it was just calls with certain people and hence certain phones.

I most often noticed it when I was speaking with my daughter and her iPhone 6. I Googled around trying to figure out why those calls were different.

What I came across was the HD Voice feature that AT&T has enabled using their Voice over LTE (VoLTE).

Here's a brief explanation of what HD Voice is:


HD Voice is essentially wideband audio technology, something that long has been used for conference calling and VoIP apps. Instead of limiting a call frequency to between 300 Hz and 3.4 kHz, a wideband audio call transmits at a range of 50 Hz to 7 kHz, or higher. That’s much more in line with the human voice, which transmits audio between 75 Hz and 14 kHz.

Here's AT&T's page on their HD Voice. Notice that it requires specific SIM cards. Don't sweat checking your SIM card. Just walk into an AT&T store and ask for a new SIM. They're free and it'll only take a couple of minutes. 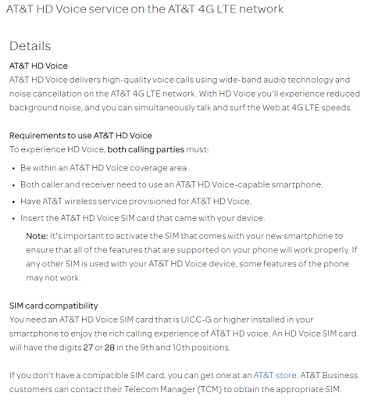 My daughter's iPhone 6 does support VoLTE as does the BlackBerry PRIV so if the planets are aligned I get HD Voice calls with my daughter.

Most likely the g.722 codec. https://en.wikipedia.org/wiki/Wideband_audio?wprov=sfsi1

Cellular carriers are starting to support it. IPT phones have had it for some time on internal calls. PSTN doesn't support it, so there are 'islands' where it's supported.

Perhaps someday it will work inter-carrier.

It's distinctive - when you hear it you know something is different and clearer.