I've been watching for GPSs for a while. The trigger for me to finally buy one is an upcoming trip to Ireland. DealsPlus had an entry recently for a Mio DigiWalker C310x GPS from Frys for $198 (by the way, the price is still good as I write this). 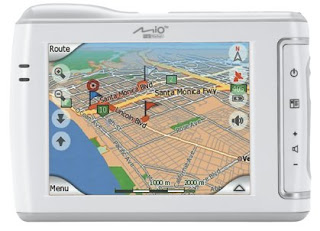 Of course, I Googled it and found that there was a very active user community. Interestingly, it is a WinCE platform and can be unlocked as simply as holding down 2 of its buttons and resetting it!

It came in just a day before a friend was making a trip to Microsoft so I loaned it to him to get some real world experience. As expected, it was useful to navigate around in the rainy Northwest but unexpectedly he found that it did a really good job of knowing where subtleties like on-ramps were.

It's taken a couple of days to learn my way around the menus. They're not entirely intuitive.

With all the talk on the forums about hacking and skinning, I haven't found that I'm unhappy enough with the out of the box experience to make it work hacking. (I know that's hard to believe!)