This is a continuation of iPhone 6 - Part 2.

Next I wondered how to get photos from the iPhone to my PC. I had been using Bluetooth on my Android devices. (I will discuss Dropbox and Google Photos later.)

Again iTunes came up. The only alternative I came up with was a USB cable. Not as capable as I expected.

GasBuddy startup - You can't set a startup page for GasBuddy like you can in Android. If the app has closed it starts at the "Find Gas Near Me" page. Otherwise it returns to the last used page

Pocket Casts - You can't set a unilateral playback speed. Changing the "Up Next" sequence requires an extra step to "Edit" the list where in Android it's just tap and hold to move. It's very unusual for an Android app to have a more optimal user experience.

Direct dial icons - You simply can't do it. This would be a homescreen widget in Android. There are some workaround apps that use Safari but they aren't very elegant.

Swype - Swype caused the Gmail app to terminate when tapping the "Search" button on the Inbox screen. This worked fine using Apple keyboard. I'm sure that will be fixed. Also, Apple switches back to the Apple keyboard when entering passwords. Probably a good idea but a little disconcerting.

Other iDevices Ringing with iPhone

By default all devices on the same iTunes account ring when the iPhone rings. It took a little while to find that setting with some spousal consternation.

Google Photos - Google Photos doesn't upload photos until you launch the app. And if it starts uploading and you navigate to another app it stops after 5 minutes. Here's a "cool hack" to get around this. 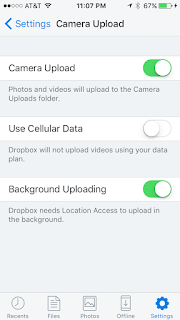 Pocket Casts - Pocket Casts doesn't begin downloading podcasts until the app is launched even when plugged in. Don't forget to launch it before you go to bed. On Android Pocket Casts pauses while Runkeeper announces its intervals. On iOS Pocket Casts just keeps playing.

Gmail - My wife (using Gmail on iOS) has commented that she had received a notification of new mail but when she went to the Gmail app there was nothing new there. Then quickly she'd say "There it is." It seems that Gmail doesn't load new mail until the application is launched. There could be some other subtleties here but this is the general observation.

iOS seems to have (or at least shares) much lower granularity of location than Android. Here is a comparison of the same GPS sensitive app (Runkeeper) running on iOS and Android. Notice that there are many more GPS fixes under Android. 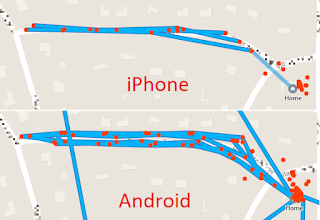 Sending a text has a "whoosh" sound. If you're a "Good Wife" fan you'll remember that's how her son got in trouble. To eliminate the sent text notification tone "u can flip the switch on the side to vibrate and you wont hear anything." Really?

On the Moto X you can eliminate camera shutter sound. The OnePlus wouldn't let you do that. On the iPhone "The only way to turn this off is to turn on the mute switch." See above.