This is a continuation of iPhone 6 - Part 3.

iOS 9 has a "Back to..." button in the top left corner if you go from one app to another, e.g. Hangouts to Settings. But this is only one level and doesn't always persist if you navigate within the second app. 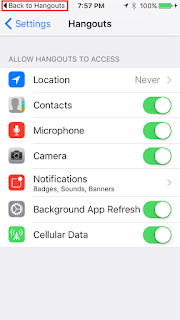 Lollipop's SmartLock with Trusted Devices, Trusted Locations and On-Body Detection only requires unlocking the Android phone with a PIN a few times per day. The iPhone's Touch ID requires unlocking the iPhone with a fingerprint every time you want to use it. Further the sequence that you use, e.g. notification displayed, tap Home button, pressing thumb on Home button vs. swiping notification, pressing thumb on Home button, have different results.

I had to call AT&T to activate the hotspot although it had been working fine under Android. And you can't change the SSID without renaming the phone. 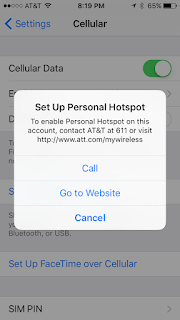 Something in the back and forth migration disabled my Google Voice voicemail. Almost certainly a one time issue.

iMessage was turned on by default. There are stories about how difficult it is to migrate from iMessage back to native SMS. After weeks of discussions with Apple Care I'm still not receiving group MMS from some iMessage users.

Also, you can't integrate Google Hangouts into iMessage so I had 2 different messaging apps.

I hadn't realized how much I depended on Android's voice controls, Moto Voice and Ok Google. I had to turn off Ok Google detection on the OnePlus One but I still could dictate brief text messages using the microphone icon on the keyboard. And on the Moto X I could listen to and respond to text messages without even taking the phone out of its holster. None of this is available on the iPhone.

The Motorola Connect app on the Moto X connects to a Chrome extension on a PC to giving me bi-directional connection to the Moto X's SMS. I din't realize how much I used that until it was gone. iMessage has this function on other Apple devices.

Obviously accessories for the iPhone are widely available. I've struggled with my niche Android phones to find holsters and charging docks. More mainstream Android phones likely wouldn't have that problem.

I like carbon fiber on my smartphones going back to my Samsung Captivate. The iPhone 6 I bought was space gray so I added a nice carbon fiber skin.

I loved the size of the iPhone 6 but with the differences in how iOS operated compared to Android I couldn't rationalize the $500 expenditure.

Yahoo! News had this related article.

As I discussed this journey with the president of our company he said "iPhone users just don't understand what they're missing." I'll leave that attributed to him.
Posted by Ben Moore at 7:24:00 PM